This article brings lots of evidence to light of the Connection between the Muslim Brotherhood and Modern Day Germany. It is a long read but then again history has a long road. For those of you who do not want to receive my emails, just email me and I will remove you from my mailings. My reasoning I don’t see many of you respond to the read request, which tells me you don’t want to be bother with the info. That being said still some very important info. that plays into days world events.

The German Menace of Islamo-Fascism
By Mark Musser

While many speak of “Islamo-Fascism” these days, they do not really seem to take the history between Fascism and Islam very seriously. Many pundits like to use the term “Islamo-Fascism” as a political metaphor, but strangely, they have far less interest in actually connecting the dots historically.

One significant personage that has been too often overlooked is the Swiss Nazi banker François Genoud (1915-1996), who became increasingly involved in Middle Eastern terrorism after World War II. Genoud was in charge of the Nazi treasury both during and after the war. During the war, Genoud worked with the German counterintelligence service called the Abwehr in Germany, Czechoslovakia, Hungary, and Belgium and was very involved in wheeling and dealing with currency, diamonds, and gold. Such dealings would have certainly included the robbery of Jewish victims who were deported to death camps in order to be euthanized. 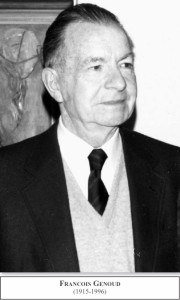 Genoud took over Hitler’s publishing rights after his death, and he stated that the Fuhrer wanted his message to be spread into the Third World to keep his dreams alive. Genoud also made a fortune off the publishing rights to Josef Goebbels’s diaries. Not only was Genoud actively involved in the ODESSA organization that helped high-ranking Nazi leaders escape to places like South America and the Middle East, but he also infamously helped pay for Adolf Eichmann (1906-1961)’s defense together with Gestapo chief Klaus Barbie (1913-1991). While Eichmann was essentially in charge of the holocaust on the Eastern Front, Barbie was otherwise known as the Butcher of Lyon in France.

At about the same time, Genoud began bankrolling Islamic terrorism. As a veritable harbinger of 9-11, he was the mastermind behind the February 1972 hijacking of a Lufthansa flight in the name of Palestinian liberation from the Zionist occupation of Jerusalem. While the flight attendants were released, the hijackers were rewarded with a handsome five-million-dollar ransom that became the foundation stone of modern Palestinian terrorism against Israel. Then followed the Munich Olympics massacre, in which 11 Israeli athletes were killed on German soil, together with another Lufthansa hijacking a bit later that led to the release of three dangerous terrorists in Germany. The hijackers threatened to blow up the plane unless they be released. Against Israel’s wishes, the terrorists were released. At the time, many in Israel and in Israel’s government, including Prime Minister Golda Meir (1898-1978) herself, were very suspicious of German intelligence collusion with the terrorists.

Many believe that Genoud was the very founder of the international Al Taqwa Bank in Switzerland that was directed by a Neo-Nazi Islamicist by the name ofAhmad Huber, originally Albert Huber. This bank helped sponsor Osama bin Laden and was shut down after the 9-11 terrorist attacks for aiding and abetting both al-Qaeda and Hamas. Italian security dubbed it “The Bank of the Muslim Brotherhood.”

More Americans should therefore recall that 9-11 was hatched in Hamburg, with no small thanks to Germany’s multicultural treatment of the Muslims. Moreover, the ghost of Nazi racism still haunts modern Germany, as virulent anti-Semitism is thriving behind the scenes through the Muslim community behind the façade of multiculturalism. Multiculturalism is also far more akin to fascism than communism because it willfully celebrates the differences. Americans should further recall that the Ottoman Empire was on the side of Germany in the First World War, and that the Muslim Brotherhood was in thick with the Nazis during the Second World War.

Today, the Western stronghold of the Muslim Brotherhood resides in Germany, and the group is becoming much more animated and influential in America these days as well. The Obama administration has been openly courting the Muslim Brotherhood for the last several years, especially with regard to the Arab Spring that now has the entire Middle East up in flames with the rise of ISIS/ISIL. As early as 1991, the Muslim Brotherhood advocated a jihad of stealth against the United State by infiltrating its institutions. How far along are they in 2015? According to some, the Muslim Brotherhood in Egypt is strongly linked to the Benghazi attack itself.

The Muslim Brotherhood was founded in 1928 in Egypt by Hitler admirer Al-Banna (1906-1949). The grand mufti of Jerusalem, Amin Al-Husseini (1897-1974), joined the Muslim Brotherhood that same year. With a nod to Genoud, who visited Palestine in 1934, the grand mufti was a Palestinian Arab nationalist who worked closely with the Third Reich. The grand mufti recruited some 20,000 Muslim soldiers from Croatia and Hungary into the SS. Plans were discussed between Hitler and the grand mufti on how to destroy the Jews in Palestine, something Israel’s Prime Minister Netanyahu referred to not long ago with his own interpretation of the affair. The grand mufti even visited Auschwitz and urged Himmler to speed up the destruction of the Jews. Yugoslavia wanted to indict Amin Al-Husseini as a Nazi war criminal, but he escaped from French detention.

Somewhat troubling, Germany quickly found its way back into the Balkans after the collapse of the Soviet Union. Germany was originally the only country in the world that wanted to split up Yugoslavia. Thanks to strong German media influences, Serbia was quickly demonized during the Balkan War. The Balkans were accordingly split up along ethnic and racial lines so that Croatia, Kosovo, and Albania have become independent countries. Yet it must not be forgotten that the Nazis sided with both the Croats and Kosovo-Albanian Muslims against the Serbs during World War II. The Balkan War was perhaps the first salvo of the so-called Arab Spring.

Is it a coincidence that Germany is leading the charge with regard to the Syrian refugee crisis? Has anyone noticed that Germany seems to have the fewest problems with the Muslims in Europe? How can fascist Muslims who believe in Islamic supremacy benefit the most from multiculturalism? Does anyone carethat two Nazi publishers in the 1930s, Bertelsmann and Holtzbrinck, now controlmost of the big-name publishing companies in the United States?

Howdisquieting is it that apocalyptic environmentalism, post-modernism, and the global warming hoax all largely originated in Germany? Is it relevant that George Soros’s stupendous big bets in the ’80s and early ’90s against other currencies were based on the German mark? According to Pamela Geller’s Atlas Shrugs, there is even credible intelligence linking Soros to Genoud. Is this intelligence truly credible, and if so, does it have any bearing on Soros’sbackground history in Nazi-occupied Hungary in 1944 as a teenager?

Going all the way back to the Second Reich under Otto von Bismarck (1815-1898), Germany has been ever searching for a highway from Berlin to Baghdad through the Balkans, the very frontier between the Muslim Middle East and the European continent – i.e., the very powder keg that touched off World War I. Thanks to the Cold War, important Nazi scientists were covertly incorporated into America’s research labs to help stand up against the great dangers posed by the Soviet Union. Countless other Nazis simply got off scot-free. As the threat of international communism overshadowed the concerns over National Socialism in postwar Europe, many today are likewise oblivious to the very real possibility that Germany is still a menace.

I receive lots of news and articles for CSC Talk Radio

This is one of the reliable sources  & opinions that I trust.

Please tune in weekday mornings www.CSCTalkRadio.com with Beth Ann as together we share coffee and commonsense conversations that are sure to Bring America Home©